Andreas Christensen will arrive at Stamford Bridge in the summer like a new signing, because he pretty much will be. On loan to Borussia Monchengladbach for two seasons, much has changed since Christensen was last at Chelsea.

Jose Mourinho has been and gone, as has Guus Hiddink, and new manager Antonio Conte has a penchant for defenders. He’d collect them all up if he could.

Christensen will have a perfect opportunity to fight for a role with a club who will likely be Premier League champions. As long as he gets on the right side of Conte, the Denmark international’s future looks bright. 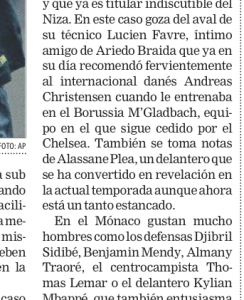 But that hasn’t stopped interest from elsewhere. Gladbach have been verging on desperate to keep the player, but have pretty much admitted defeat to Chelsea.

Catalan newspaper Mundo Deportivo report on Wednesday that Barcelona have also been alerted to the Chelsea player. It’s stated that former Gladbach manager Lucien Favre is a friend of Barca technical director Ariedo Braida, and has ‘strongly recommended’ the potential transfer to him.

It’s tough for Barcelona, because Christensen is Chelsea’s, but the widespread interest will be useful if Conte doesn’t take to the defender.