Mentions of the word ‘Lloris’ in Spanish newspaper AS and all its 11 regional variations over the past week stand at one. Pedro Lloris scored the only goal of the game as Atarfe Industrial beat Alhaurin in the Tercera division, the fourth tier of Spanish football.

And yet, if Sky Sports and others are to be believed, AS, a Madrid leaning newspaper, have reported that Real Madrid are looking at Tottenham goalkeeper Hugo Lloris as an alternative to other goalkeepers. AS would have, according to claims which are now countless, stated Real Madrid have pinpointed the Tottenham captain as a fall-back option.

But there’s not one thing in AS’s print editions. Online, they’ve looked at English rumours of such a possibility, but not claimed it themselves. AS have provided that in video form, complete with screenshots of the English articles, and in an English language article. 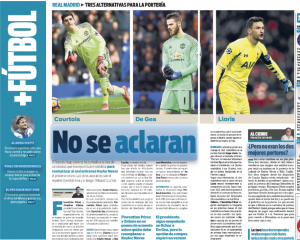 danger of a translation problem here.

Catalan newspaper Sport have picked up the Hugo Lloris claims on Wednesday, as part of their commitment to poke Real Madrid, and specifically Florentino Perez, with a stick whenever possible.

The idea of disagreement between Zinedine Zidane and Perez over targets is just too good to ignore, and the English press have handed them a present.

The Telegraph and The Sun have suggested they know the inner workings of Real Madrid transfer policy, and that Tottenham’s Hugo Lloris is on the list, and that’s what started it all.

AS, meanwhile, don’t deserve the blame they’ve been getting.