Fanatik report Kasimpasa have sold their winger Trezeguet to the Premier League side Aston Villa for €12m.

The player has previously been linked with a move to England following interest last summer from other Premier League clubs.

On Friday we covered claims from Turkey that the 24 year old will join the Premier League side in the coming days.

Despite these earlier reports, Fanatik say the deal is worth €12m, not €11m. Kasimpasa president Turgay Ciner has reportedly allowed Trezuquet to get his dream Premier League move after talks with Aston Villa. The Turkish side’s chief initially wanted €15m but he’s dropped his asking price to €12m. 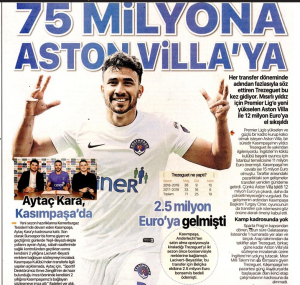 The Egyptian winger hasn’t been included in Kasimpasa’ preseason training camp in Austria and Fanatik report he’s due to fly to England in the coming days to join up with his new team.

Trezeguet signed for the Super Lig side from Anderlecht for €2.5m two seasons ago and they’re in line to make a great profit by selling him to the Premier League new boys.