Home Championship West Brom have not withdrawn from transfer – And movement ‘in coming...
SHARE

Sunday’s edition of Record reports that despite claims from England saying West Brom have pulled out of the race to sign Matheus Pereira, that isn’t actually the case.

The Sporting player has been repeatedly linked with a move to the Baggies over the past week or so, with a loan deal thought to be the likeliest option.

However, there’s been disagreement on the terms of a loan, the payment for such, clauses relating to playing time and also a permanent buying option for next summer.

Record states there could be movement ‘in the coming hours’, making it clear that this one isn’t dead yet. 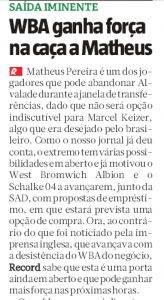 The Championship club don’t have it all their own way, with Bundesliga side Schalke also said to be very much in the race for the Brazilian.

West Brom initially offered a €300k loan fee, which would double in case of promotion, and Sporting are looking for something closer to €1m, with a guarantee over playing time.