Earlier in April, we relayed news from France that Brighton turned their attention towards Paris Saint-Germain’s teenager Moussa Sissako after failing in their efforts to convince Batista Mendy, Nantes’ 18-year-old defender, to join them.

Wednesday’s edition of L’Equipe has a story regarding the Ligue 1 winners’ change in policy in handling their young players, where they offer their academy graduates a better deal to continue at the club, instead of moving elsewhere.

In the report, there is a mention of the Seagulls’ interest in the 17-year-old defender and that the Premier League club were looking at the option of bringing the centre-back to England in the summer transfer window.

However, the deal did not take shape as the player continued in Paris and signed his first professional contract with his current employer in June. 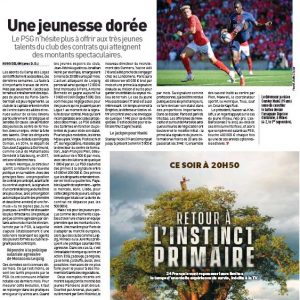 The French newspaper explains the details of the deal from which Sissako will earn close to €1m for a period of three years and that is what convinced him to stay at PSG.