Eric Maxim Choupo-Moting left Stoke City and completed a switch to Paris Saint-Germain on August 31st, a year after joining the English club from Schalke.

The 29-year-old’s compatriot and Kayserispor defender Jean-Armel Kana-Biyik expressed his delight after the forward moved to Parc des Princes and stressed the “talented player” deserves to be where he is.

One of them is from Choupo-Moting’s former national team coach Hugo Broos and the 66-year-old Belgian explained in detail why he was surprised after finding out that Thomas Tuchel’s side had signed the attacker.

“He has good tactics, he does not lose a lot of balls, but his problem is mental. For me his signature at PSG is a surprise and I think it will be difficult for him. There is still a difference in quality with other players. It may be a level too high for him,” the 2017 African Cup of Nations winning coach said.

However, Schalke director of football Christian Heider does not agree with Broos and he admitted that he remains confident that Choupo-Moting can impress after his move from Stoke.

“Someone who does not know Choupo-Moting will be very surprised and I understand. But when Choupo is in shape, he’s an excellent player. He can play for Paris, I’m 100% sure. He is fast, technical, good with the head and intelligent,” stressed Heider. 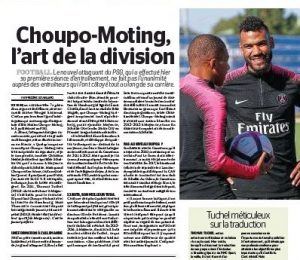 “In 2011, Tuchel (then coach at Mainz) fought to recruit him. And yet, Choupo evolved with the Hamburg reserve. But Thomas knew him from the youth category, and he kept telling me (Heider was his sports director at Mainz): he’s the perfect player.”