Tuesday’s edition of L’Equipe has Paul Pogba splashed across the front page and, for once, it’s a positive article. The French newspapers speaks about the midfielder’s impact at Manchester United since he made his comeback this month, and even talks about how happy he now seems.

Putting lengthy injury problems behind him, Pogba now feels able to perform at his best, and Ole Gunnar Solskjaer gets some praise for standing by his player, publicly and privately.

As far as L’Equipe have it, Manchester United grew tired of Pogba’s injury situation and just prior to the Covid-19 football lockdown, they decided they’d be prepared to sell if an offer around €100m arrived.

With clubs now facing an economic crisis, that’s not thought possible, and a source at United is quoted as saying: “Solskjaer doesn’t want to let go of Pogba. He enjoys his technical relationship with Bruno Fernandes, who arrived this winter. At the moment, the only element that would allow a transfer would be that a club interested in the French offers a player who interests MU in the deal.” 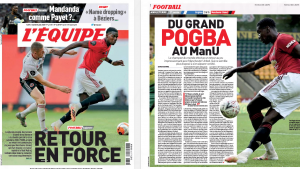 Despite that slight hint at a possible transfer opening, it’s certainly not the theme of L’Equipe’s article, which instead wants to paint a picture of a player who has left troubles behind him and who is very valued by his current club.

The French newspaper even states the World Cup winner is ‘swimming in happiness’ right now.