The summer transfer window in France is closed, finally shutting on Friday, and L’Equipe has decided to rate each and every Ligue 1 club’s transfer business out of 20.

The French newspaper has given a rating of 15/20 for Lille and while explaining various reasons as to why they have been generous in giving them such good rating (only Rennes – 17/20 and Saint-Etienne – 16/20 are ahead of Lille), they talk about Nicolas Pepe.

He was linked with a move away from Les Dogues, but Christophe Galtier’s side were successful in keeping him at the club. The winger last season’s form saw him draw attention from clubs across Europe and Arsenal’s interest is mentioned in the report.

It’s not just Arsenal with a mention, as L’Equipe claims Sevilla, Real Betis and Lyon were also interested in the player and his employer even received an offer as high as €35m for the player. 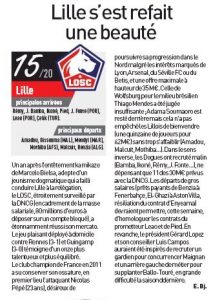 However, there is no explanation in the report as to which club made the aforementioned bid and whether Pepe was open to the idea of leaving his current employer in the transfer window.