Jose Callejon has been speaking to Spanish newspaper AS ahead of Napoli’s match against Real Madrid in the Champions League. The recent goalscoring form of Napoli has brought attention from around the world of football, and it will be one of the most anticipated ties in the draw.

Rafael Benitez obviously came into the conversation, with the Newcastle United manager having been in charge of both clubs in recent years. It was Benitez who took Callejon to Napoli, and the player is clearly still very fond of his former coach.

Quizzed on the Newcastle boss, Callejon told AS: “Rafa Benitez called me and told me that it would be good there. I did not hesitate for a second. Rafa said: This guy will score 20 goals. He was right. 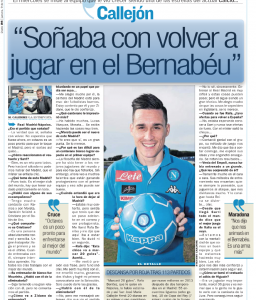 “I was under pressure then, but it worked (laughs). I was very happy with him, he taught me a lot, we won two titles and I got my first call with the selection. I can only thank him.”

Despite Benitez now being at Newcastle, the pair still talk regularly, and Callejon said they’d messaged each other a few days ago, with exchanges of good luck.

Benitez has Newcastle on course for promotion and his former player is happy about that: “I’m very happy that things will go well in England, he deserves it.”

Maybe Callejon would be so happy that he’d fancy joining up with Benitez again. His 10 goals and 10 assists so far this season show he’s certainly a player to want, but a move to Newcastle would be a long shot.