We really thought the Bruno Fernandes saga was over, but things have been surprisingly rekindled this week.

On Monday, reports from Portugal said Manchester United had been scouting the midfielder in Sporting’s match against Portimonense at the weekend.

And now, Portuguese newspaper Record managed to interview the former Red Devils’ striker Louis Saha, who had something to say about the Lions star.

“Bruno Fernandes is a player of great technical quality who could be extremely decisive at various points in United’s game”, Louis Saha told Record, “but more than that, he’s a born leader and that’s what Manchester United are missing this season”.

Regarding Sporting’s demands for the player, which were said to be of €70m, Louis Saha said it was a fair price for the midfielder.

“He’s undoubtedly a huge player and his market value should not be impeding for a club like Man United. In addition, Sporting have the right to ask whatever they want for one of their most valuable assets. Bruno Fernandes was absolutely impressive last season.” 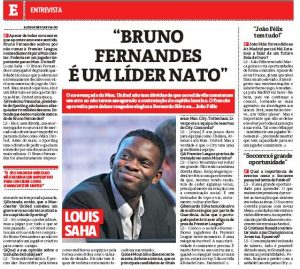 Something that also came up again this week are the rumours linking Bruno Fernandes to Real Madrid. A couple of Portuguese newspapers have stories today saying the Galacticos could still go for the 24-year-old, since they have been finding it hard to sign Paul Pogba from Manchester United or Christian Eriksen from Tottenham.