Despite all the initial confidence from the Portuguese press saying Manchester City would sign Thiago Almada from Velez Sarsfield, it seems things are not as easy as expected.

Newspapers from Lisbon continue to follow the case closely as Sporting, currently with their hands tied, hope the Premier League champions sign the player and loan him to them for a couple of years.

But the Argentine club are fighting hard to keep their gem, and that’s what Record reports today.

The newspaper says Velez are ‘convinced’ they are holding the winger for one more year, with manager Gabriel Heinze being crucial in the process of speaking to him. 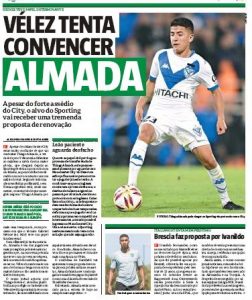 Record says Almada is called ‘Thiago Heinze’ in the dressing room, since he’s very close to the manager, and has indeed been convinced to stay for longer so he only moves to Europe when he’s more ready.

It’s said Velez are now offering him a new contract, and in case it’s accepted, his release clause is being increased from €16m to €25m. And that would postpone his trip to Europe for at least one year.

Nottingham Forest talks for player have ‘come to a stop’ –...