Home Europe Manchester United said to have made offer for defender – Alternative to...
SHARE

Manchester United have made an attempt to sign the Benfica defender Ruben Dias, according to the Portuguese media this Sunday.

Newspaper O Jogo is the one who says the Red Devils tried to take the 22-year-old, but their offer was turned down by the Eagles president Luís Felipe Vieira.

The outlet apparently doesn’t know how much were the Old Trafford side bidding, but it was certainly below the player’s €66m release clause.

The report doesn’t bring many details because Wolverhampton Wanderers also had bids for two Benfica players rejected, and it’s all said in the same story. 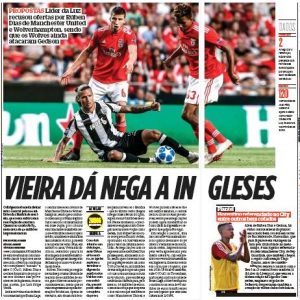 Benfica have made €200m from sales this summer, so they don’t need to negotiate for any of their players. Especially Dias, who’s been a crucial player in defence for some time now.

According to O Jogo, Benfica are in talks with him to increase his release clause to €88m. But the interest from English clubs has been encouraging him to ask for a big pay rise.

With reports from England saying Manchester United will pay over £80m for Harry Maguire, it’s obvious that Luís Filipe Vieira would demand Ruben Dias’ release clause to be triggered for a move to Old Trafford.

But regardless of the bid being rejected, his €66m price tag is still there.