The outlet claims the Argentine striker is a key figure in the negotiations, since he would give the Old Lady a big advantage in the race for Lukaku.

United aren’t getting to what Juve demand for Dybala, just like Juve don’t get close to what United demand for Lukaku, but this swap is seen as a path for an agreement and ‘white smoke’.

Inter are worried about this, because it’s looking unlikely they can beat Juve in the race, with or without Dybala getting involved. 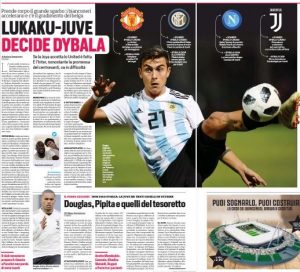 Inter Milan are set to raise their Lukaku offer from €65m to €75m, but they don’t know if that will be enough to convince the Red Devils to sell him. Especially because Ed Woodward will wait until Juventus make their bid.

Meanwhile, Dybala’s mind isn’t made up yet. For now, he’s focused on convincing manager Maurizio Sarri he deserves a place in Juventus’ team.

It’s said Manchester United want Lukaku’s sale to be done before the end of the week, so they can have enough time to sign a replacement.

Perhaps that replacement can arrive with his departure.