Over the past year or so, Noa Lang has started making a name for himself around Europe.

The Dutchman, who left Ajax to try his luck in Belgium, has succeeded at Club Brugge, earning himself a lot of praise and a lot of attention from clubs around the continent.

Arsenal have reportedly been among them, alongside the likes of Leeds United, but we must not forget that Italian clubs have recently made a push on the transfer market of late.

Milan are the ones who seem to be taking the first steps, with it reported on Tuesday that Lang’s agent was having a chat with those in charge at San Siro, although what about wasn’t really specified.

Stefano Pioli’s side have been said to be interested in the past, so it could simply be a courtesy chat to see if a move could be done, but Gazzetta dello Sport, who have an article about it in their Wednesday edition, don’t forget the Gunners.

In fact, they state Lang has ‘admirers in the Premier League, first of all Arsenal’.

To us, that sounds like Mikel Arteta’s side are trying to create a gap between themselves and the English competition, although the price tag isn’t as generous as first anticipated. 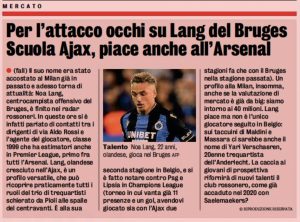 Gazzetta state ‘the market valuation is already big’ and ‘we are at around €40m’.

That would be a considerable investment for Arsenal, although they have made it clear they won’t shy away from getting a player their manager really wants him, as demonstrated this summer by their acquisition of Ben White from Brighton & Hove Albion.

Whether Lang becomes one of these remains to be seen, but it does seem like the Gunners are well and truly interested in Noa Lang.