Sergio Agüero scored his first league goal of this campaign in Manchester City’s 3-0 win over Fulham at the weekend.

Earlier reports from Spain indicated the striker, whose contract expires in the summer, has been offered to Barcelona. The striker recently discussed the reports linking him to the Catalan club.

“They are all writing Barça, Barça, Barça. I mean, let’s hang on a bit, see, we’re [I am] still at City,” he said on Twitch, as relayed by Mundo Deportivo.

Another report from the same newspaper makes it clear that Ronald Koeman has said ‘no’ to signing the South American in the next window. 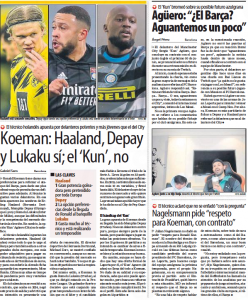 Joan Laporta has been elected as the club’s new president and despite claims of Pep Guardiola’s star having a formal offer from Laporta, Koeman isn’t keen on having Agüero at his disposal at the Camp Nou.

The Dutchman doesn’t doubt the attacker’s quality and is aware he can contribute a lot to Barca.

However, Koeman prefers a young striker over Agüero, who will turn 33 in June and has struggled with injuries this season.

The Barcelona manager prefers to sign one of Erling Haaland, Memphis Depay or Romelu Lukaku to bolster his side’s strike force for next season. 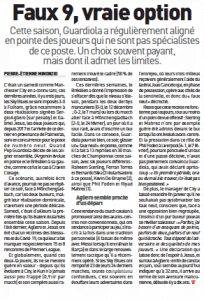 Mundo’s report focuses only on Koeman’s stance on the South American and gives no information on where the former Atlético Madrid man will play next season.

In their match preview for City’s Champions League clash against Borussia Mönchengladbach, Tuesday’s edition of L’Equipe provides a short update on Agüero’s future in Manchester.

It’s claimed that ‘everything seems to indicate’ City’s all-time leading scorer’s adventure with the English club will come to an end after this season.

PSG have been linked recently, but L’Equipe offer no update in that regard.