The midfielder’s contract expires at the end of the season and earlier claims suggested he won’t sign an extension.

Reports in England continue to insist the 30-year-old is one of top targets for Ronald Koeman in the summer, despite the Catalan media stating otherwise.

The Netherlands international knows the La Liga side’s manager from his time with the national team.

Mundo Deportivo on Tuesday explain Jürgen Klopp’s star has qualities that no midfielders at the Camp Nou currently possess.

However, his arrival in the summer would ‘close the door’ on Carles Aleñá [currently on loan at Getafe] and also restrict Moriba’s development at the club.

Another report from the same newspaper also takes a look at where the former Newcastle United man could fit in at Barcelona, if he joins them.

Frenkie de Jong and Pedri are currently ‘untouchable’ in the midfield. The former is set to take over Sergio Busquets’ position, which would then allow Moriba to have more opportunities in the first team. 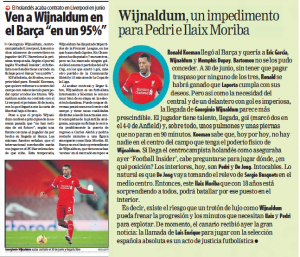 his arrival would ‘slow down’ the progression of Pedri and Moriba, and also restrict their playing time.

Bosch is of the belief the Dutchman’s signing can be an ‘impediment’ for both Pedri and Moriba.

Whether or not Barcelona will give any heed to Bosch’ take on signing the Liverpool star remains to be seen.