In November, Everton were linked to Andrija Zivkovic. Rumours bouncing from England to Portugal said Marco Silva wanted the Benfica winger for the January market.

Today, newspaper Record brings a new story on the player, revealing Benfica’s response to an approach from Shakhtar Donetsk for him.

According to Record, the Eagles have said they won’t let Zivkovic go for less than €30m. The Serbian international has gained some importance in the team and the club have no intention of seeing him leave so soon.

The outlet also recalls the links with Everton, saying Marco Silva is an admirer of Zivkovic’s qualities.

They make it clear that both managers who want him are Portuguese, since Shakhtar are led by Paulo Fonseca, once the subject of Everton links himself. 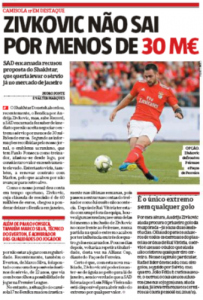 Zivkovic has a €60m release clause, and has been linked to several Premier League sides in the past few years, a move he’s presented as being keen on.

The winger is still to score and has two assists in 13 appearances for Benfica this season.