Marcel Brands may be the Director of Football at Everton these days, but that doesn’t mean he isn’t keeping an eye on his old haunts.

The Dutchman made his name in the Netherlands, starting as Director of Football at RKC Waalwijk before moving on to the same role with AZ Alkmaar and PSV Eindhoven.

It was the latter two where he was most successful, particularly PSV, with his impressive work there earning him plenty of attention from European clubs and his eventual move to Everton.

Having spent eight years at the club, it’s fair to say he still has a big attachment to the Eredivisie side, and particularly those players he signed.

They are among the more expensive signings by the club in recent years, but both proved to be disappointing, with them leaving after failing to prove good value.

That’s something that shocked the now Everton director, who was expecting more from both at this point of their careers.

“I never expected them to play at a club like FC Utrecht again at this age,” he told De Telegraaf.

“Adam came in with extremely high expectations. He played a lot at first but had the misfortune of a system change, and he had to develop in a different role.

“He remained stuck and then made less fortunate choices with, among other things, his loan to Turkey.

“Bart did well immediately with us and quickly became popular with fans. It was also clear that he could get even more out of his game, but he was progressing. 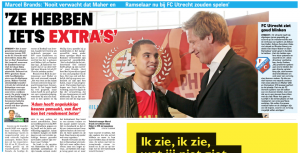 “They have taken a step back to make two forward. They are players with something extra and can play at a higher level than the Eredivisie.

“They know the standard required for the international team, and I see them going abroad in the long term.”

It’s unlikely either will end up at Everton in the near future, but Brands’ comment on the loan move to Turkey may suggest he won’t be looking at that route for his current fringe players, with the possible exception of Cenk Tosun.