Galatasaray legend, and one of the best defenders ever to play for the Turkish national team, Bulent Korkmaz, has spoken to Fanatik about Leicester City’s Caglar Soyuncu and praised his performances.

Korkmaz, who was the captain of the Turkish national team when they finished 3rd at the 2002 World Cup, also won the UEFA Cup and Super Cup for Galatasaray during his playing days as their club captain.

Now managing Turkish Super Lig club Antalyaspor, Korkmaz said the comparison between him and Caglar isn’t even a debate, as he believes the Leicester City man has already surpassed him: “People are comparing me and Caglar but I have to say he is already a much better player than me. He is more talented, and he is playing in a better league. 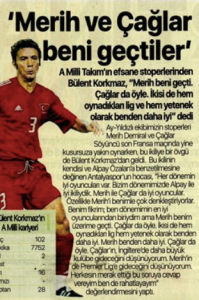 Soyuncu struggled in his first season in England due to injuries and loss of form, but he’s impressed in this campaign for the Foxes.

He’s now established himself as a regular under Brendan Rodgers following the departure of Harry Maguire to Manchester United.

The player has also been excellent for the Turkish national team during recent international breaks, with the country on the verge of qualifying for Euro 2020.

From Spain: Chelsea player ‘repeatedly offered’ to another club for transfer

Suggestion club could hijack Newcastle United signing – Have made contact...

From Spain: Chelsea player ‘repeatedly offered’ to another club for transfer