Now that Peru are officially out of the World Cup, it’s time for the future of André Carrillo to start being decided.

After a loan spell at Watford, the player is back at Benfica, who are still not completely sure about what they will do with him in the summer.

As reported by newspaper Record today, there’s still a chance he could stay in Lisbon for the next season, although the club are tempted to sell him due to his success playing for Peru.

The outlet claims that several approaches and offers are getting to Benfica. They don’t name who those are from, but recall that Everton have been in the mix for the 27-year-old. 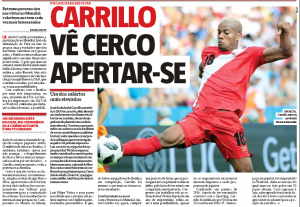 At the time Carrillo was loaned to Watford, the Hornets had a €15m buying option over him, which wasn’t activated. But now, with his good performances at the World Cup, Benfica are hoping to make even more than that amount.

With no updates on Everton’s chase so far, we wonder how long the Toffees will wait before moving if their interest is genuine. Recent reports have claimed Marco Silva used Carrillo’s World Cup performances to convince the club to go for him.

After good displays against Denmark and France, the player managed to score against Australia in his farewell to the tournament.