Portuguese newspaper O Jogo comes up today with a list of four Premier League clubs who would be interested in Porto striker Moussa Marega.

According to the outlet, Chelsea, Everton, Tottenham Hotspur and Everton are all keen on the 27-year-old, who has recently shown his wish to move to the Premier League.

O Jogo’s story is mostly about the desire that Porto manager Sergio Conceição has to keep the player in the squad for the next season.

That’s why the Portuguese side are unlikely to negotiate for the player, and whoever comes for him will have to pay for the €40m release clause.

O Jogo writes that Chelsea, Everton, Spurs and West Ham haven’t given up on the signing yet, and could make an attempt before the end of the transfer market. 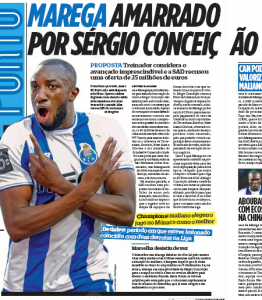 We’ve covered lots of stories about Moussa Marega in the past few years, and we’re used to seeing Everton and West Ham linked to him. But this interest from Chelsea and Tottenham seems like something new.

Chelsea have Alvaro Morata and Olivier Giroud up front and if those two stay at Stamford Bridge there’s not a lot of room for Marega. There’s also Michy Batshuayi returning from loan.

Antonio Conte’s exit could change things and with Maurizio Sarri widely expected to take over, it’s worth noting Napoli have previously been linked.

Tottenham have Harry Kane and Fernando, and the former recently said he sees himself staying at Spurs next season. There’s also Vincent Janssen, who spent last season away on loan, and Tottenham would surely have to see the back of the Dutchman, and possibly Llorente, to make their interest plausible.

Marega scored 23 goals for Porto last season, and was impressive for the club as they became Portuguese champions. It would be no surprise that a Premier League club would go for him, and considering the market values these days, €40m doesn’t sound absurd.