Marco Silva’s chase for the Benfica winger Andre Carrillo continues to be taken very seriously by the Portuguese press, with the World Cup giving the story a boost.

On Monday, newspaper O Jogo claims that the player’s performances in the tournament have been increasing the chances of a move to the Toffees.

The reason for that is because these games are being used by Silva as an argument when saying the club should sign the Peruvian international.

Peru are already eliminated from the World Cup, after defeats against Denmark and France, but Carrillo still managed to do pretty well in both matches. 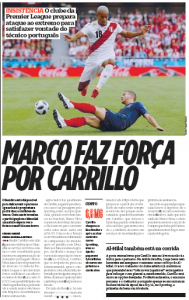 Benfica are said to be pretty keen on selling Carrillo this summer, yet their demands aren’t very low. Club president Luis Filipe Vieira considers that at least €20m will be needed to take the player.

Carrillo spent the last season on loan at Watford, also by Silva’s request. They’ve known each other for a long time, as they worked together at Sporting back in 2014.

O Jogo are very clear, it’s Marco Silva trying to persuade on the signing, just like he did when manager at Watford.