Home Europe Everton and West Ham interest in striker backed up – Could be...
SHARE

The interest from Everton and West Ham United for the signing of Benfica striker Haris Seferovic continues to be highlighted by the Portuguese media.

Last week, we had already seen Toffees and Hammers being named as clubs who had ‘made contact’ to sign the Eagles star this summer.

Newspaper O Jogo had claimed that these clubs got information on a potential move and the possibility of a bid ‘was open’, as the Lisbon side are demanding €25m for his sale.

Now it’s time for A Bola to back up their interest, as they feature today a story saying now that Seferovic is back with Benfica’s squad for pre-season, it’s once again claimed that Everton and West Ham are both interested in his signing. 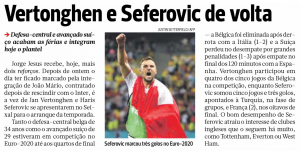 According to them, Seferovic’s performances in the Euros, where he scored three goals, has drawn the interest from clubs who had already been following him, such as the Toffees and the Hammers.

Still, A Bola doesn’t bring any information on talks or bids from these clubs, so it doesn’t really look like they’ve made any first moves for his transfer yet.