Ronald Koeman is beginning to lose excuses, and genuine reasons, for Everton’s poor start to the season. A very tough set of fixtures has served to pile pressure on at Goodison Park and that’s making things more difficult.

Every poor result sees the situation slip a little, and losing to Burnley at home has led to widespread questions about the Dutchman’s future.

Koeman will still believe that regardless of what Everton spent during the summer window, they didn’t replace Romelu Lukaku well enough, and that’s having an impact right now.

Even as the window was due to close, Koeman was telling the Dutch media he needed another striker for Everton to achieve the club’s goals.

Now eyes turn to the January market, and less options will be available. One likely to be a possibility for Everton is Kevin Gameiro. 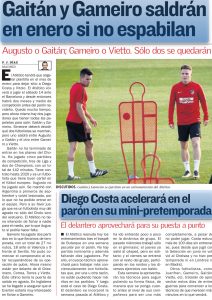 AS say the French striker is one of Atletico Madrid’s sale options, as they look to make room for Diego Costa.

Everton are once again mentioned as a possible destination for the player, being ‘very interested’ in Gameiro.

This is a rumour that will likely continue in both the Spanish and English media, with Gamiero likely needing a new club, and Everton needing goals.

Gameiro is an experienced striker, and may be what Koeman needs at Everton.