With financial issues besetting the club this year, Marseille have seen several of their star players linked with exits over the past few months.

Lucas Ocampos has already gone to Spain, Luis Gustavo could head to Turkey and Florian Thauvin has plenty of interest given his revival. Morgan Sanson is another name to add to that list.

The midfielder has been linked with clubs up and down the Premier League, with West Ham the last to be linked.

L’Equipe have an update on the situation at Marseille today and add more names to his list of suitors, Everton and Leicester City.

The newspaper claims that the Premier League clubs, as well as Valencia, have shown an ‘interest’ in the midfielder but the asking price has put them off.

Marseille want as much as €35m for their man and that price has led the ‘pretenders’ to ‘cool for now’.

Whether either of the Premier League sides will come back is debatable as well. Everton have already added Andre Gomes and Fabian Delph to their midfield so they’re not short 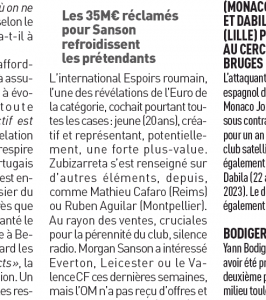 Perhaps if either side moves players on, or Marseille lower their asking price considerably, they will come back. Until then, this is a move that looks unlikely to ever get off the ground.