Cast your mind back to the summer transfer window, and you’ll remember we did numerous articles about Everton’s interest in Jean-Clair Todibo.

The Blues were desperate to add a central defender to their squad across the summer, eventually agreeing a deal for Norwich City defender Ben Godfrey.

Before that Todibo was heavily linked, having also been named as a potential target during the January transfer window as well.

It was felt that Everton could make use of their special relationship with Barcelona, who they’ve signed Lucas Digne, Andre Gomes and Yerry Mina from in recent years, to get the young defender for a reasonable price.

That never happened, with Todibo instead heading to Benfica on loan for the season in a deal that included an option for the Portuguese side to make it permanent.

However, that deal has proven to be a disaster, and now they are determined to end it as soon as possible according to O Jogo.

The newspaper report that the ‘priority’ for coach Jorge Jesus is to add a central defender to his squad in January if the board will allow it.

The number one target is Lucas Veríssimo, and the club are so confident that they can get a deal over the line that Jesus is already counting on having him in his squad.

Should he arrive, that would mean a player can leave, and the first in line is Todibo. He is yet to make his debut and is not ‘immediately counted’ by Jesus, who ‘gives preference’ to Jan Vertonghen and Nicholas Otamendi. 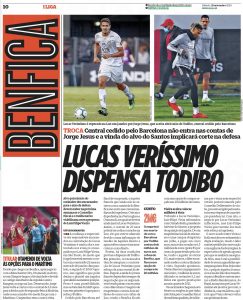 Thus the 20-year-old has ‘his days numbered’ at the club, having already missed out with an inflammation in his right Achilles tendon and a muscle rupture in his right thigh.

There are two key aspects for his departure, with the club needing to finalise the deal for Veríssimo and reach an agreement with those in charge of Barcelona to terminate the deal early.

That is something Benfica are willing to pay to make happen, having already spent €2m to secure the loan deal in the first place.

All in all, it’s looking bleak for Todibo and Everton must be delighted they decided to avoid him and look closer to home with Godfrey.

Todibo never looked like a smart signing after his time at Schalke, and he’s not done a single thing in Portugal to dispel that idea with Benfica wanting rid and Everton presumably thinking they dodged a bullet.