Whatever way you look at things, there’s no denying that the situation at Everton is not good at this moment in time.

The Blues were looking to be top-six contenders this season but, despite having an opening set of fixtures that most would consider kind, find themselves in the bottom three.

That’s heaped the pressure on manager Marco Silva, with reports this week suggesting he had three games to ensure his time at Everton doesn’t come to a premature end.

That report is confirmed by A Bola, who say Silva met with Everton officials this week to discuss the current situation, although these meetings are a weekly occurrence.

In that meeting, it was made clear he had the next three games to save his job, although there is a ‘mutual conviction’ that Everton can turn things around. 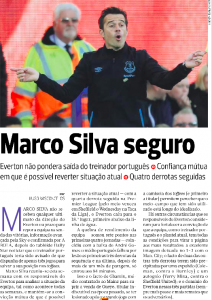 A Bola explain that those in charge at Goodison Park think that there has been an element of bad luck to the situation, such as injuries to André Gomes and Jean-Philippe Gbamin.

Seamus Coleman’s red card in the loss to Burnley, and Yerry Mina’s own goal against Sheffield United, also fall into that category.

They’ve also seen positives, such as the display against Manchester City and Everton’s perceived ‘dominance’ in defeats, they’ve had more possession and more shots despite losing, and seemingly believe these factors warrant patience when it comes to Silva.

The pressure, though, is undoubtedly on, and anything but a rapid upturn in form after the international break could see Everton on the manager hunt once again.