Barcelona have identified Tottenham striker Harry Kane as a potential signing as they pursue a top-level forward to replace Luis Suárez.

Suárez turns 33 next year, and there is a consensus at the Nou Camp that they will have to replace the Uruguayan sooner rather than later.

That has led them to search across Europe for potential targets, and Harry Kane is on the list, according to Mundo Deportivo.

The newspaper reports that while Kylian Mbappé is Barça’s primary target, Kane is also on the list of potential targets.

It’s explained that Barcelona view Tottenham’s star man as a player whose ‘quality is not under any doubt’ as not only is he a striker that scores goals, he also combines ‘wonderfully’ with the rest of the team.

The La Liga champions know that both Kane and Mbappé are difficult signings to get done, with Kane locked down on a deal until 2024 at Spurs.

He would cost a high price to get out of White Hart Lane, but that’s not considered a ‘great handicap’ for Barça, as the amount would be amortised across the span of his contract. 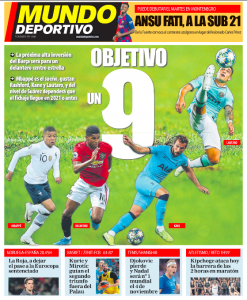 There is no mention of how much Barcelona would pay for Kane, but it’s easy to imagine Tottenham could ask for a world-record fee for one of their own.

Regardless, it appears for the first time since Kane’s emergence as one of the best strikers in the world, Tottenham may be facing a fight to keep hold of him.