Everton have made an enquiry for FC Porto midfielder Otavio but have been told they will need €60m to secure his signature.

That’s according to O Jogo, who say that the Portuguese side are expecting ‘proposals’ to arrive at their door sooner rather than later.

They explain that teams from the ‘mid-range’ in the Premier League have already ‘made approaches’ to Porto over the 27-year-old, but Porto are not interested in a sale this summer.

The winger remains one of Sergio Conceicao’s key men after a season in which he scored three and assisted 13 in 32 league games.

This is the best phase of his career so far, and he is ‘more highly valued than ever’, with big clubs preparing to knock on the door to try and take him away.

Porto, though, are protected by a €60m release clause, which, unlike last year when it fell to €40m during June, does not change. 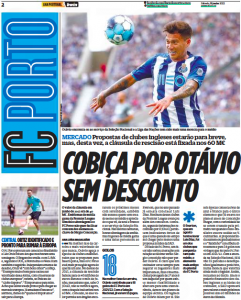 The figure, though, has not scared off his suitors, who have been watching the winger for both Porto and the Portuguese national team.

In recent weeks there have been approaches from several mid-table sides in the Premier League, including Everton, who tried to sign Luis Diaz last summer.

None of the clubs have gone beyond initial contacts, but according to O Jogo’s information, there are ‘strong indications’ that a proposal will arrive at some point.

One of those clubs are Everton, who have ‘asked for’ the player, but they know that they will need to get close to that €60m clause to even tempt Porto into negotiations.