It is now a ‘reality’ that Allan will leave Napoli this summer, but the Italian side are still locked in negotiations with Everton about a move.

That’s according to Il Mattino, who bring the latest update in the long-running transfer saga today.

The newspaper reports that Napoli manager Gennaro Gattuso has given his ‘blessing’ to selling the midfielder and striker Arkadiusz Milik this summer, in deals that are expected to bring in €80m.

Thus, Cristiano Giuntoli has been in ‘relentless negotiations’ with Everton over a move after they ‘relaunched’ their interest in the midfielder.

It’s claimed Allan already had an agreement in place with the Blues on a deal worth €4.8m a year, a negotiation that was seemingly undertaken with Napoli’s blessing.

There is no mention on the length of the contract Everton are offering.

The Brazilian, though, is ‘playing on two tables’ because he wants to see what Atlético Madrid are willing to offer and is not ‘indifferent to their interest’.

Everton then, have a rival for his signature, but they are ‘unlikely to back down’ because Carlo Ancelotti has put Allan at the top of his wishlist.

They are in ‘the fast lane’ for the player but need to raise their offer by ‘a couple of million’ to match Napoli’s €40m asking price.

Il Mattino are confident they can reach an agreement, however, stating that ‘immediately after mid-August’ that there will be ‘the exchange of documents’.

They also say that Inter Milan have been in contact to try and learn about the negotiations with the Toffees.

That last line is the only real update Il Mattino are offering though, as everything else in their report has been well established before now. 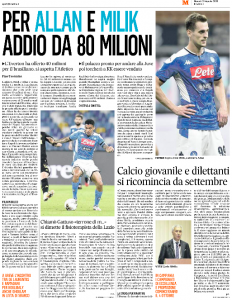 Indeed, this report appears to be nothing more than them openly declaring what Napoli would like to make as opposed to what will actually happen.

To explain, earlier this week we covered a report from Gazzetta Dello Sport that Napoli wanted €40m combined for Allan and defender Faouzi Ghoulam, so it is unlikely that Everton would pay €40m alone for the latter.

The same newspaper also stated on August 11th that Aurelio de Laurentiis was softening his stance and would accept a deal worth €30m plus bonuses, so it seems strange for Everton to pay more just two days later.

The wages reported are not new either given Il Mattino reported that Allan would pick up €4.7m a year at Goodison Park on July 25th.

Instead, this is all feels like speculation – perhaps even information given to the newspaper by Napoli – to try and tempt Everton into spending more than they need, and giving Napoli much-needed funds in the process.

That’s a trick Marcel Brands is unlikely to fall for, with these negotiations, which are clearly happening, looking likely to rumble on for a while yet.