For some months, SportBild have been knocked sideways by Marina Granovskaia somehow managing to be both a woman and powerful in football.

The situation, which at times seems jaw-dropping for them, was the theme throughout much of their coverage of Timo Werner’s transfer to Chelsea, and the same can be said for the Kai Havertz mini-saga.

However, this week they’ve remembered that as well as being female and powerful, Granovskaia is also Russian. So, naturally, there’s talk of ‘espionage’.

To be clear, SportBild shout out ‘Espionage by Chelsea’s Russian’.

So what do they mean? Well, we can get to that soon, but first let’s enjoy the start of SportBild’s article, where they once again fall over themselves to convey the significance of Chelsea’s transfer chief being a WOMAN: ‘Marina Granovskaia is the most powerful woman in world football and responsible for transfers at the traditional London club.

She is considered a tough negotiator. To get to the office of Marina Granovskaia (45), you have to go past several bodyguards. The office of the most powerful woman in world football, housed in the stadium area at Stamford Bridge, is closely guarded.’

She’s a woman, so obviously has to be super-protected. 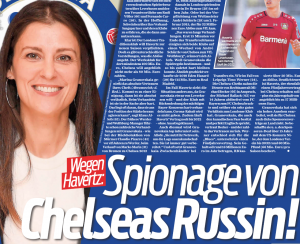 Anyway, back to the espionage. The German magazine again claims that Chelsea have been seeking out contacts around the Bundesliga to find out what could make Bayer Leverkusen go weak when it comes to a Havertz transfer.

Therefore, work is going on behind the scenes to find a way to convince Bayer. Of course, this isn’t some secret plan, given SportBild have been reporting it for a couple of weeks.

Tune in next week for SportBild, when the magazine can again be astounded that a woman is powerful in football.