Sunday’s edition of Sport reports that Leicester City and Watford have both asked about signing Paco Alcacer, with the Foxes arriving in the ‘past few hours’, and a ‘transfer is being cooked’.

The forward had been reluctant to leave Barcelona this summer but the insinuation is he’s being pushed out with Ernesto Valverde not seeming to think the player is important in his squad plans for next season.

Alcacer himself is said to now be aware of the situation and is ‘studying’ an offer to leave Spanish football for the Premier League.

A potential transfer is valued at €30m and it’s claimed Alcacer has already ‘ruled out’ the Watford option, which would push Leicester further forward. Pushing it home further, Sport say the Hornets have been ‘totally’ dismissed from the running. 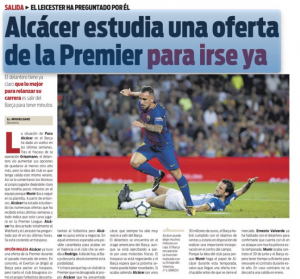 The Catalan newspaper says ‘everything indicates’ the 24 year old will end up in the Premier League this summer.

Southampton have been the English club most linked to Alcacer, but don’t get a mention today.

Leicester don’t seem to really need the Barca player, unless they’re planning on clearing some forwards out.