Chelsea may have just spent €20m to sign Emerson Palmieri from Roma, but maybe he wasn’t the club’s first option in the transfer market.

According to Portuguese newspaper Record today, there was another Brazilian who the Blues were keen on spending that money on, and that’s Alex Telles.

Previously linked to the London side, the player was reportedly much watched by the club in the past couple of months and there was even an attempt to take him from Porto.

The problem is Chelsea had €20m as their budget, so that wasn’t nearly enough to convince the Portuguese side. And the player wasn’t very keen on leaving now either. 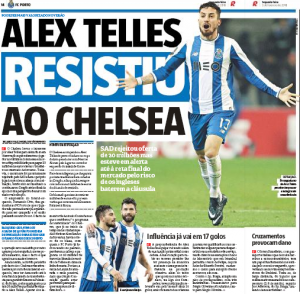 O Jogo claims that Telles wants to be a champion for Porto and has been advised to stay at the club until the end of the season so he can leave on a higher status.

Even though Chelsea had their bid rejected, Porto were expecting the Blues to activate the player’s €40m release clause at any moment in case they couldn’t find another left-back in the market. But that’s when Palmieri showed up as an option.

Last year, Telles’ agent Fernando Otto told Sport Witness he had a ‘feeling’ that his client would play for Chelsea.

But now with Palmieri signed, is there still a place for Telles?