Almost immediately after being loaned out to Napoli for the season, articles started to appear claiming that the Serie A side wanted to make the move for André-Frank Zambo Anguissa permanent.

The Fulham midfielder impressed a lot in his first few appearances for the Serie A side, and there was even hope that a move could be made in January.

Things have changed a bit since then, it seems, with Anguissa suffering an injury that kept him out for a few games followed by international duty with Cameroon at the Africa Cup of Nations, and Gazzetta dello Sport throw some doubt over his future in Naples.

Looking at what the Italians could do going forward, a few questions are asked about current loanees, namely the Fulham man and the recently arrived Axel Tuanzebe.

They write: ‘Will Anguissa be redeemed for €15m? And what will become of Tuanzebe?’. 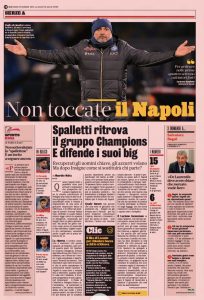 The answer to those are: no one knows.

They are ‘questions that still do not have an answer and it will be necessary to see what the plans of president Aurelio De Laurentiis will be’, as he tries to juggle the very tough task of combining ‘the reduction of salaries’ all the while wanting ‘to keep the squad competitive’.

A lot will likely depend on where Napoli finish the season in Serie A, as qualification for the Champions League would bring a healthy boost to the club’s coffers.

The Naples based club currently sit third, four points ahead of Atalanta who have a game in hand.

As for Fulham in all this, it remains to be seen what their preference would be, but with them currently sitting top of the Championship with a five point gap over Bournemouth, a return to the Premier League is on the cards, at which point Anguissa coming back could go a long way in saving them an expenditure if they need to bolster their midfield.