Home Championship Club to make move for Fulham player in January – Have the...
SHARE

André-Frank Zambo Anguissa has been a revelation at Napoli so far this season.

On loan from Fulham, the player has received endless praise from the Italian media. This week, one journalist even said he’s the best midfielder in Serie A right now, and there’s widespread agreement that Napoli got themselves a great deal.

Gazzetta dello Sport report the club have paid Fulham €400k for the loan, and they have a right of redemption next summer at €15m. That looks like great business for the 25-year-old, but Napoli have a plan to pay less.

There’s a belief relegation has created ‘many problems’ for Fulham’s finances, and that the Serie A side can take advantage of that to push a cheap deal through. 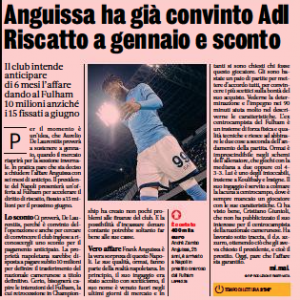 Given there’s a near certainty Napoli would pay the €15m next summer, and if they wouldn’t then someone else will, it makes little sense for Fulham to offer a €5m discount just because the deal is brought forward.

Expect more games from De Laurentiis as the season goes on.