Franck Kessie is undoubtedly one of AC Milan’s major players, so that he’s not in top physical condition right now is a worry. The midfielder went to the Tokyo Olympics and is now paying the price for pushing himself too far.

It’s expected he’ll be back in peak condition soon, and then Milan’s major worry with the player is losing him. Kessie has a contract with the Serie A club which lasts until June 2022, and hope over a renewal has been wobbling in recent months.

Gazzetta dello Sport report interest from PSG remains, as does that from Tottenham, and now Manchester United have joined the ‘pressing’ to sign the 24-year-old.

The Italian newspaper believe the Premier League would suit Kessie’s style perfectly, and with Ole Gunnar Solskjaer needing a midfield addition, it’s no surprise to see Manchester United linked with the Milan man. 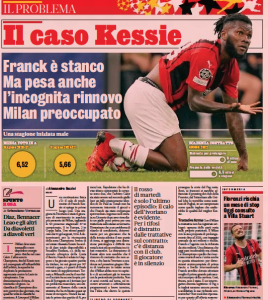 There’s no indication of whether the Old Trafford club will make a move in January, and offer Milan a knockdown price, or wait until next summer for a free transfer.

Either way, this looks like a bargain option for Manchester United in an area they need a signing.