Barcelona have been repeatedly linked with Matthijs de Ligt in recent weeks by the Catalan media.

De Ligt isn’t the only Ajax player catching the eye of Barcelona, report Mundo Deportivo in their Friday edition, with a teammate making himself of interest.

The Catalan newspaper claims Barcelona are interested in 22 year old midfielder Donny van de Beek. It’s stated this interest has been ‘backed up by the club’s own sources in Amsterdam’.

At this point it’s worth a note of caution. Last summer, when Tottenham were in the process of signing Davinson Sanchez, there appeared a clear attempt by people at Ajax to leak interest from other clubs, which looked fake, in order to try and drive the price up.

Tottenham didn’t fall for it, naturally, and got the player for the figure stated at the start of the negotiations, rather than the bloated attempts thrown out to the Dutch media whilst talks were ongoing. 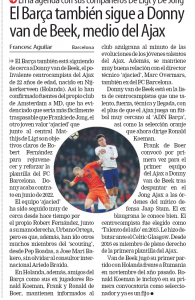 With De Ligt, and now Van de Beek, rumours being pushed it doesn’t take too much to believe similar is happening again.