The Yellow Canaries are looking to sign another striker in this window after already bringing in Vedat Muriqi and former Werder Bremen forward Max Kruse.

After fighting relegation for most of the last campaign, Fener are looking to rebuild their squad this summer and several players have already arrived at the club.

Fenerbahce sporting director Damien Comolli will fly to England in the coming days to hold talks with regards to signing the Crystal Palace attacker, and the Super Lig side are set to make a loan offer, with an option to buy the Belgian.

Benteke could look to leave the Premier League side after a disappointing season and there’s a possibility he would be tempted to make a fresh start in Istanbul. 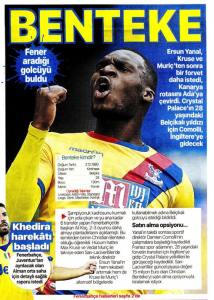 Last season the former Liverpool man made just 16 appearances for the Eagles, scoring one goal. This was down to injury and poor form.

He’s under contract with Crystal Palace until June 2020, so a loan with option to buy doesn’t make a great deal of sense until it’s noted Palace have an option to extend the deal by a further year.