The summer transfer window may be long over, but that doesn’t mean the end of Paul Pogba and Zinedine Zidane’s tedious courtship.

The Frenchmen were practically doling out compliments about each other weekly throughout the summer as they tried to push for a deal between Manchester United and Real Madrid.

That never happened, with Pogba staying put and Zidane, despite receiving massive backing in the summer, left frustrated.

The pair still want that deal to happen at some point soon, and they’re using every tactic in the book to try and make it happen.

That saw them ‘accidentally’ meet in Dubai this week, with it all caught on camera for the newspapers to joyfully eat up.

Zidane has made clear that it was all just coincidental, they happened to be in the same country and meet and, as he’s friends with the United midfielder, they had a chat. 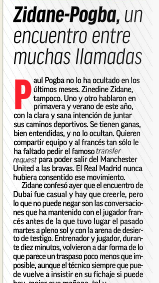 Marca say he must be believed on that but, what he ‘cannot deny’ is that the pair spoke before that meeting with ‘the desert sand as witness.’

They claim that after meetings in the spring and summer there was another ten-minute chat in which the pair tried to shape how they could make a transfer from Manchester United happen.

The issue is that Real Madrid aren’t entirely sold on the move. The newspaper claim they have ‘never consented’ to the transfer and there are doubts about whether Pogba would be a good signing.

They do not doubt the Frenchman’s quality, more whether he would fit into the Real Madrid squad as well as he does the Manchester United one.

That suggests they’d prefer to look elsewhere, perhaps to Christian Eriksen, and if Zidane or Pogba want it to happen, they’ll have to push hard for it.