Saturday’s edition of Corriere dello Sport claims the backup midfielders at Inter Milan have not convinced Antonio Conte, which is why it’s a priority for his side to strengthen that position in January.

Nemanja Matić has struggled for regular playing at Manchester United this season and his name is on ‘top of the list’ for the Serie A side.

The midfielder’s contract expires in 2020, but the Red Devils have an option to further extend it by a year.

Inter are worried that United could exercise the option to keep the Serbian at Old Trafford until 2021. This could then make it difficult for them to sign him in January.

It’s claimed the Premier League side could allow their player to leave for a low cost, only if they bring in a replacement in January.

Conte would ‘more than welcome’ Inter signing Matić as he knows the player from his time at Chelsea. 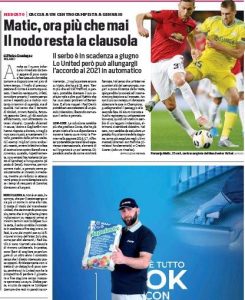 His addition would bring experience and international personality during the second half of the season, something that’s currently lacking at Inter.

Inter CEO Giuseppe Marotta and sporting director Piero Ausilio are looking for a low-cost operation, which is why they would give their ‘ok’ to signing Matić, if the fee needed to get him is low.

If they fail with this first choice, they will then look at other options.