Less than two years into his role of Director of Football at Everton and Marcel Brands is already falling foul in some quarters.

With the Blues struggling at the beginning of this season and the pressure on manager Marco Silva, the Dutchman has also come in for criticism.

Some believe his ‘failure’ to sign a defender in the summer was akin to treason, while they also suggest his transfers at Everton so far have not lived up to the mark.

Everton don’t agree with that standpoint, having been so impressed by his work so far that they promoted him to the board earlier this year and gave him an even bigger remit to transform the club.

That doesn’t impress the naysayers, though, and now it appears they may have a champion for their cause in in the Netherlands as well.

Brands is pretty well thought of back in his homeland after his impressive work at PSV Eindhoven.

However, he appears to have ruffled a few feathers this week with an interview in which he didn’t take the blame for some of his failed signings.

That annoyed former footballer Wim Kieft, who has hit out at his compatriot and questioned the work he’s now doing at Everton as well.

“You don’t expect someone like Brands to blame others for failing players whose talent he misjudged,” he writes in De Telegraaf.

“He should have just said about Maher and Ramselaar: ‘Sorry, I was mistaken and it cost PSV too much money’.

“If, like PSV, you have a much larger money bag at your disposal than all other Eredivisie clubs apart from Ajax, then it is still easy to shop. Talent recognition is sometimes difficult, but not with PSV’s budget.

“Now, for the second year, Brands is with Everton, a major club from the Premier League. With a turnover of almost €215m, Everton is seventeen of the richest clubs in the world.

“Nevertheless, the presence of the Dutch technical director Brands is by no means a guarantee of success. 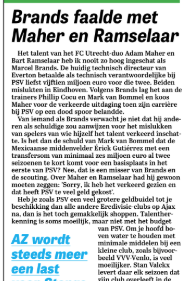 “Although he can buy almost any player that he wants and has attracted many players without producing results.

“I fear for the position of the Portuguese trainer Marco Silva at Everton. Brands would be better to look in the mirror instead of disguising his mistakes and blaming others.”