Whether you believe the very optimistic Il Mattino or the slightly more pessimistic Corriere dello Sport, the Brazilian should be wearing your club’s blue shirt next season.

We’ll start the ‘bad news’, if you will, with the latter explaining that the difference between the two clubs is ‘minimal’, with the bonuses still being the issue.

The base fee of €30m isn’t the problem anymore, with Everton having agreed to spend that, and all that remains is to ‘combine’ the bonuses.

As for what’s going on down the player’s end, that’s no longer a worry because the agreement between him and the Toffees is ‘total’.

Moving over to Il Mattino, the big news is the fact Juventus, now managed by Andrea Pirlo, made a last minute enquiry about the Brazilian, to no avail. 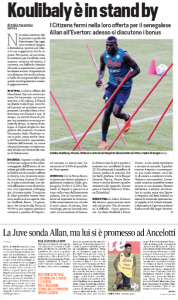 The local newspaper make it clear the ‘deed is done’, with the affair ‘closed’ at €34m.

If that wasn’t enough, they emphasise once more ‘everything is done’ after Napoli’s managing director, Andrea Chiavelli, and their director of football, Cristiano Giuntoli, worked on Thursday with Everton to ‘define the terms of Allan’s transfer to the Premier League’.

Either way, even if Corriere are on the money and there’s still the slimmest of gaps between the two clubs, it seems highly unlikely this falls through.