Ahead of the summer 2019 transfer window, there were repeat claims around Europe of Sadio Mane potentially moving to Real Madrid. Liverpool fans dismissed it as nonsense, although it did feel like there was something in it.

Not that Madrid were making serious efforts for the player, but an agent was working to try and build the temptation, whether working directly for Mane’s camp or not.

Media close to the Spanish club made it clear that whilst Mane was a player liked at Madrid, the difficulty of signing him from Liverpool made the whole thing unlikely.

Recent days have seen claims of someone offering Mane to Barcelona, and the Spanish media have now taken a look at the situation.

Friday’s edition of Sport goes over the Madrid story and insists the player was left ‘very angry’ after the Reds refused to negotiate with Madrid. There’s said to be issues over a new contract, with Mane believing he should be one of the highest paid at Anfield. Despite all of this, Sport make it clear the signing would be close to impossible, regardless of the player pushing for it or not. Barcelona are still stinging from the Philippe Coutinho deal, and know Liverpool are very difficult to deal with.

Mundo Deportivo also cover the story in their Friday edition, sounding slightly more optimistic. There’s a rough €120m price put on Mane, and if Lionel Messi leaves then the desire to enter the market will be greater.

They’ve also dug up some quotes Mane made in 2019, ahead of playing Barcelona: “Ronaldinho was my hero when I was little, I loved watching him play, especially here at the Camp Nou. That is why it is a dream come true to play in this stadium, although I would have liked to face or play with him. 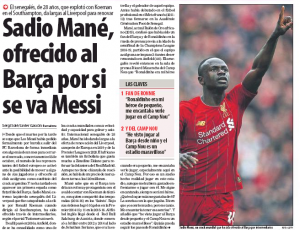 “I still love him, he will always be my hero. What did I like the most about him? The smile he played with. They say that I smile a lot, but not that much. I would love to have that smile. I have seen Barca play since I was little and the Camp Nou is a wonderful stadium.”

In itself, that means little, but it’s clear the idea of signing Sadio Mane is taken with enthusiasm in Catalonia, even if the reality of the operation would be incredibly difficult.