Wahbi Khazri spent the 2017/18 season on loan at Rennes from Sunderland. The Black Cats allowed the 27-year-old to join the French outfit following their relegation from the Premier League.

Things have not gone well for Sunderland in the last campaign. They finished at the bottom of the Championship table and will play the next campaign in League One.

Khazri has no plans of returning to the Stadium of Light, where he still has two years left on his deal.

Today’s edition of French newspaper L’Equipe claims Rennes are keen on signing the forward on a permanent deal, which has been know for some time. The Ligue 1 outfit have even offered him a three-year deal to extend his stay at Roazhon Park.

However, the Tunisian international has other options. He has already rejected the approach from Rennes because the report claims Khazri has ‘much better offers elsewhere’. 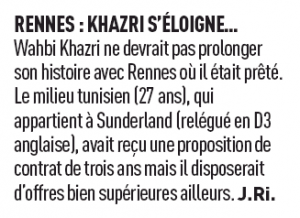 L’Equipe doesn’t mention the names of the clubs interested in the player.

Turkish publication Haberturk claimed Besiktas have made a two-year loan offer for Khazri, which may be good for the player but not so good for Sunderland.