Home Europe Real Madrid could make signing ‘within hours’, one may be leaving as...
SHARE

AS Roma goalkeeper Alisson Becker has been linked with a move to Real Madrid and Liverpool this summer.

According to Marca, the Spanish club are now edging closer towards securing the services of the 25-year-old and are in the “final stretch” of bringing him to the Santiago Bernabeu.

The Champions League winners’ interest in signing the Brazil international is firm and the player is also keen on joining. This, coupled with the Serie A outfit’s intention to negotiate for the player has helped all three parties involved reach a favourable outcome.

Real have accelerated the process of signing Alisson from days to potentially “within hours”. The player also wants his future resolved before Brazil’s first World Cup fixture against Switzerland on Sunday.

The report mentions interest from other clubs in signing Alisson, particularly that of Liverpool. Having already lost to Real in the Champions League final, Jurgen Klopp’s side will take another defeat at the hands of the same opponent, which Marca take joy in pointing out, this time to the signing of Roma’s custodian. 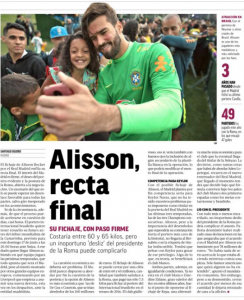 Real were also interested in Manchester United’s David de Gea and Chelsea’s Thibaut Courtois. It’s stated both the players would have cost them in excess of €100m and Alisson is the cheaper alternative.

A deal of €60-€65m should convince Roma to sanction their star’s sale to Real. Alisson will compete with Keylor Navas for a place in his new club’s starting lineup.

Marca also state the inclusion of a Real Madrid squad player would be welcomed by Roma, and that would bring the price down.

Mundo Deportivo had earlier reported an agreed fee of €75m.