After a good week or so of lull, things seem to be happening on Alvaro Morata to Manchester United. Preseason training kicking off around Europe and Real Madrid eyeing their own targets seems to have focused Bernabeu minds, helped of course by Morata sending his dad round.

None of that meant anything without a new Manchester United offer, and, hurrah, Marca say one has arrived. Many Manchester United fans see Marca as the fanzine of Real Madrid, and have a pretty low opinion of the newspaper. However, as Spanish papers go, they’re arguably the best, and whilst everybody else got their hands dirty throwing around Morata dates weeks ago, Marca stayed out of it.

They haven’t hyped the transfer as being almost done like so many others eager to artificially get their first. So when Marca say they believe things could be close, very close, it’s a step forward on Alvaro Morata to Manchester United.

In their Thursday edition Marca report that Manchester United have made a new offer of €75m, and in turn Real Madrid have brought their asking price down to €80m. Peace is breaking out.

With the two clubs just €5m apart, Marca believe the transfer could be agreed today. The word from Real Madrid is that the negotiation is in its ‘final phase’.

It’s reiterated that Morata is keen on Manchester United, and Jose Mourinho’s desire to sign the player has helped that. 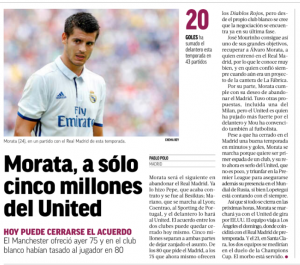 Marca add: ‘So if everything closes in the next few hours, Morata will leave with United on tour for the US.’

That’s on Sunday. Marca are now so optimistic a deal is close that they reckon Morata could join his new squad in time to fly off at the weekend.

This is all could, may… positives marked with at least a little doubt, but it’s as positive as Marca have been that a deal could be done quickly.

The Daily Alvaro Morata may be coming to an end.