In the past few days, some rumours popped up saying Arsenal would be keen on bringing Gelson Martins to London. The Gunners would be very serious in the attempt, offering €90m in a double bid for him and William Carvalho, as the story goes.

This figures should mean €30m for Carvalho and €60m for Martins, which is the latter’s release clause.

Does €60m sound exaggerated for an unproven 22-year-old? Wait until you see what Record are saying in their front-page story today.

It’s claimed that when Gelson Martins agreed a new contract with Sporting earlier this year, they included an option to raise the release clause at any time. 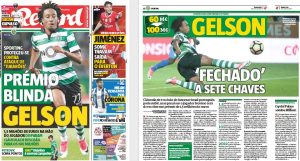 All Sporting need to do is to pay the player of €1.5m, and his release clause will jump from €60m to €100m. That’s all to give the club a bigger margin to negotiate with whoever wants him.

Gelson is considered to be Sporting’s greatest academy talent in years, and as he’s in no rush to leave, the club will keep doing all they can to have him in the squad.

This all sounds like feather fluffing on behalf of Sporting, with Arsenal being used in the process. It’s been a way of getting the higher release clause into the media, whether Arsenal have made an offer or not.