Yesterday, Portuguese newspaper A Bola came up with an article saying Arsenal were offering €80m for Sporting duo William Carvalho and Gelson Martins. The club would be attending Arsene Wenger’s request to get two players they’ve been scouting during last season.

It didn’t take long for the local press to have Sporting’s response on the matter. There are actually two versions of the story today.

The same A Bola claims that Arsenal’s offer isn’t enough. Gelson Martins is only leaving for his €60m release clause, and €30m will be needed to take William. Therefore, the Gunners need to raise their bid by €10m to get both. 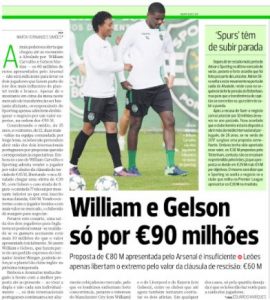 But they’ve already increased their offer to €90m, at least according to Jornal de Notícias. The newspaper has a short story today saying that after the €80m bid, Sporting asked for €100m, and the Gunners answered with €90m.

The outlet claims the amount is ‘too tempting to be refused’, and it indeed looks like so. Unless this is a big lie from both papers, these transfers seem to have everything to be done.