Arsenal are reportedly preparing a double swoop for the Sporting duo William Carvalho and Gelson Martins this summer.

That’s what A Bola claim, after an entire season with Arsenal scouting the Portuguese duo.

The newspaper says the attempt would be an ‘express request’ from Arsene Wenger, who wants to intensify the approaches after the end of the Confederations Cup. 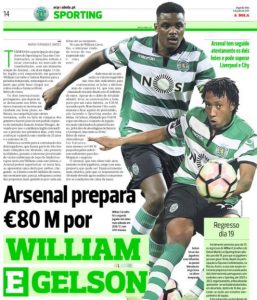 Despite the slightly sensationalist headline, the article actually claims that the business ‘could reach up to €80m”.

Explaining each case individually, A Bola recalls that William Carvalho has a €45m release clause, and Manchester City showing up and saying they could give €30m wasn’t enough to convince Sporting. The Lisbon side have been protecting the midfielder for years now, but never really received a good official offer.

Gelson’s situation is a bit different. He has a €60m release clause, and Sporting’s recent denial was to Liverpool, who reportedly offered €40m. Given the big potential he’s shown this season, he’s currently Sporting’s most valuable athlete, and the club are not in a hurry to sell.

A Bola describes the Arsenal double offer as ‘attractive’, and the Sporting board would sit and analyse it. It’s worth recalling that the Lions blocked Adrien Silva’s move to Leicester City last year despite the done deal involving Islam Slimani, so they will not give in just because one of the transfers seems good.

After all the rumours we’ve been reading regarding these two players this year, we’d says Arsenal’s double bid seems pretty reasonable, but it’s got to actually exist first.