After all the initial excitement, the Portuguese press is now taking it easy on Willy Boly’s transfer to Wolves. What was initially claimed as a done deal is now just a transfer being negotiated, as the agreement is hard to find.

On Monday, newspaper A Bola had already claimed that the player’s agent didn’t want the move. They actually said neither Meisa N’Diaye or the defender were keen on the Wolves transfer. 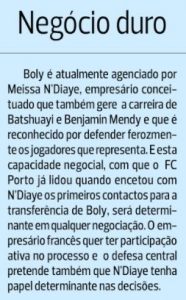 And the outlet keeps saying the representative may be a problem. In a short paragraph today, they describe N’Diaye as someone hard to negotiate with, as he’s always ‘fiercely defending’ his clients’ interests.

That’s something very good for Boly, but not for Porto. The player is clearly being used in the deal that involves Ruben Neves’ permanent transfer, and the agent has obviously realised that his client is leaving a club who fights for titles and plays in Europe for a Championship side.

As covered by us earlier today, A Bola reported that Nuno Espírito Santo has already called the player explaining his plans. But will he be able to convince him? Maybe he was just asking the player for his agent’s telephone number.

Player has said goodbye to teammates – Set to fly to...

No ‘signifcant progress’ in Everton transfer – Toffees ‘positioned’ but ‘nothing...

Manchester United ‘ready to move forward’ for signing – Board listening...